I crack myself up.  Today during Symphony rehearsal, I could not stop jamming and boogying in my seat. We rehearsed Debussy's Iberia, Ravel's Bolero, and Bizet's Carmen Fantasie. It helped that I was in the back of the section (we violins rotate seating every concert,) and my stand partner was absent. The Debussy is not whopping hard for the violins, but some of the rhythms are tricky. We're often waiting for our turn to play, and the third movement has a steady beat going during which its hard to repress shaking my butt. However, it was during Bolero that I really got my jam on. What an awesome piece. I'm not a rocker in the classic sense. I know the names of a few bands, like Led Zepplin, of course, ACDC and, uh, what's that one my husband loves, oh yeah, ZZ Top. And I can even sing along with some songs here and there. But Bolero tops all of these bands.  Every song from all of these bands. I'm sorry, it just does.  The snare drum alone is enough. It beats the same rhythm from beginning to end starting softly and becoming louder and louder until you realize that its blowing you out of your seat. And then, almost every instrument in the orchestra passes around a melody which grows in complexity with the addition of extra rhythm or harmony. We only played it once through today, but I was going nuts by the end. I was ready to throw down my instrument and break out into full body dance mode right there.

I didn't play the violin in college. Instead, I joined an a capella singing group. At this particular school, there were eight a capella groups ranging from totally cool all men's groups, to completely dorky coed groups, with some all female groups sprinkled in. Not surprisingly and with the utmost pride, I was in the dorkiest of all coed group. We sang jazz and classical music. We had the music majors and the future professional singers in our group. We were the group who dreaded the joke portion of the "arch sings" that happened every week because no one ever laughed at our jokes. I loved my a capella group. And I was always the one boogying just a little too hard during concerts and in rehearsal. I actually didn't know this about myself until I saw The Video. There is a video that exists, unless by some lucky happenstance it has been destroyed, which reveals the true me: the bubbling energy, the butt shaking urges, the weird facial expressions, all which I have learned to repress, or maybe the better word is refine, unless I am sitting alone in the back of the orchestra. In this video, we were performing in a huge hall in our most formal dress for a large audience, I can't remember exactly where. It was shot from the front row of the hall, so the perspective is screwy. We were positioned in a semi circle, probably about fourteen of us, and everyone was singing with expression and energy, but keeping their bodies relatively still and composed. After a few seconds, your eye wanders about three quarters of the way around the semi-circle, and you see a totally ridiculous person gyrating, flailing her arms, bouncing up and down, and wiggling her head all over the place. When I first saw this, I almost died of embarrassment. As I grow older however, I fall more in love with the memory of this video. Somehow it reminds me to love the music and to feel it in my body. And when I can do that, I know the path I've chosen is the right path for me. 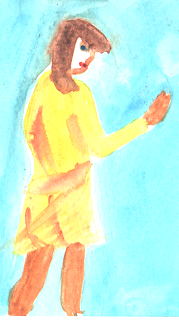