A Story of Determination

Before my kids were born, my husband and I learned how to snow board. We bought three days worth of lessons that were required to occur three Sundays in a row, the first on New Year's day of that particular year. We bought all of the equipment realizing that renting for three days would pay for our own, and maybe we'd like it a lot and come back over and over. Ha.

When you watch a snow boarder, it doesn't look that hard. They glide down the mountain and every once in a while lift off the ground and maybe hoot or holler. And their boots are less cumbersome than ski boots and they don't mess with poles. What I didn't register as significant is that every snowboarder out there wears a helmet. This is not true for skiers. Some skiers wear helmets, but not every single one. Like its a law or something.

Oh, it should be a law. The first time I fell down on a snow board, (which was the first time I tried to stand up,) I hit my head so hard I moaned a loud sad moan. The second time I fell down (which was shortly after I moved for the first time,) my goggles fell off, and I hit my head so hard it felt like I had been in a car accident.  This continued for a couple of hours at which point I hazily located my husband up the bunny slope grappling his way to a standing position, and decided to rest my head on the snow and cry for a little while. Then we went to lunch.

Somehow, after lunch we decided we were ready for the easy green slope up the real chair lift. This ended very badly, and not for several hours. We careened into the woods involuntarily. We lost our goggles, our helmets, our snowboards, (which are connected to the boots for a reason,) our gloves, our pride, our love for each other. We experimented with going slow, (didn't make a difference,) we tried going fast, (never again,) we tried cutting the board deeper into the snow, (uh, why?) We drove home in silence. Well, we moaned without speaking. No words were uttered.

Miraculously, we returned for the next two lessons, and eventually learned to snow board. I don't know how it happened, but it did, and before the kids, we did go back a bunch of times easily making up for purchasing our own equipment. However, if I could do it again, I wouldn't! Good thing its already done, and no one told me beforehand what the dickens I was in for in the beginning.

Coffee: I found my original cup that was hiding in the pantry for a long time. Celebrated by bringing it to Starbucks for a drip decaf.

Cups and Bags Challenge: Two reports came in today of reusable cup usage. THANK YOU!! We're up to $32. Man, we're getting there. Oh, and there were at least two people at Starbucks with reusable cups. If you use a reusable cup email me here: cupsandbags@yahoo.com or send an email to my regular address, or post a message on Facebook, and I'll send a dollar to Bring Recycling!

Watercolor: (the woods at the ski area) 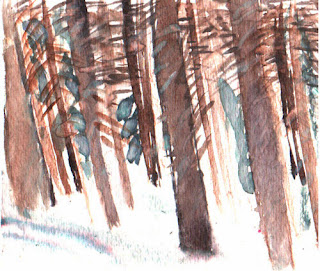