I'm sorry, but I'm so pissed at Jane Eyre right now. I know, she's mad because the man she was supposed to marry, it turns out, already has a wife. But he gave her a perfectly reasonable and eloquent explanation and declared his love for her in no uncertain terms, has unequivocally praised her character, and has defied societal norms in his desire for a wife with brains as opposed to a wife with money and status. And she loves him despite his flaws, feels sorry for and sympathetic towards his desperate situation, but leaves him anyway. (In case you're unfamiliar with the story, he married a woman fifteen years ago who turned out to be bat-shit crazy and is currently locked in the attic of his house.) I guess you can't divorce a lunatic. Is that still true? According to Downton Abbey it was still true in England at the turn of the twentieth century. (Remember Edith's guy who is married to the woman in the insane asylum?) Anyway, Jane left Edward and now she's roaming the country side about to starve to death with no money, relations, or clothes except for what she's wearing. It seems like she could have let him take her to some faraway place to live together in sin, and avoided all the brink of death drama.

Here's a theory. Deep down, she knows that love should trump societal rules, but she's afraid to face the judgement of her peers and God, (the ultimate rule maker in her book.) So she breaks her man's heart who has grown utterly pathetic over the years, and her leaving, she knows, is the final straw. And she feels so guilty about this that she punishes herself by wandering unfamiliar territory for days, and almost dying. There's a lot left in the story, and all I really remember about it is that she goes back to him at the end and finds him blind but alive which if she had just stayed with him in the first place would have been the same result with a lot less heart break. Maybe she hears through the Victorian England grape vine that the crazy lady dies, but I don't think so. I think she goes back because she can't take it any more and the religious cousin who wants her to marry him grosses her out. I mean, she leaves the love of her life on religious grounds then rejects the religious guy who wants her. That's pretty clever, Charlotte Bronte.

Jane reminds me a little bit of George W. Bush. You can have principles, but when you're holding onto your principles for the sake of holding on to them instead of bending them for the overall good of yourself and others, you're pretty much an idiot.

Coffee: my decaf was yummy this morning. Lots of chocolate along with it.

Cups and Bags Challenge: Holy Moly, I'm excited because a brand new person emailed about digging her cup out of the closet and bringing it to the store today. This is great news. We're up to $33.  Also, she told someone at the counter about the Challenge which means maybe we'll blow through this first $100 soon. (and a friend is waiting in the wings to continue the challenge once we meet our first $100.) I'm feeling optimistic! If you use a reusable cup to buy a drink, email me here: cupsandbags@yahoo.com or email my regular address, or send a message on Facebook, and I'll donate a dollar to Bring Recycling. 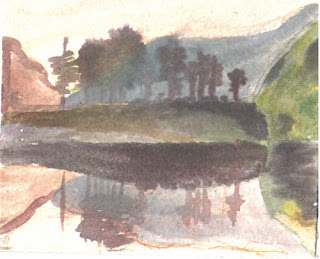